Jack Roush, Co-Founder of Roush Yates Engines and President of ROUSH Industries, Inc., was born in Covington, Kentucky. Roush was always interested in finding out what made things tick. He received his mathematics degree with a minor in physics from Berea College and moved to Detroit to go to work for Ford Motor Company. He went on to earn his master’s degree in Scientific Mathematics from Eastern Michigan University.

In 1976, Roush formed Jack Roush Performance Engineering. His success on the track, combined with his reputation as a performance engineer helped his young business thrive, and although he stopped operating a race team in the late 1970’s, his company stayed well entrenched in the sport; building engines for other teams throughout the early 1980’s.

In 1988, he decided to move his race operations to North Carolina. Already an accomplished racer, Jack wanted to once again push the boundaries of his love of the automobile industry and expand his passion for building engines and racing. 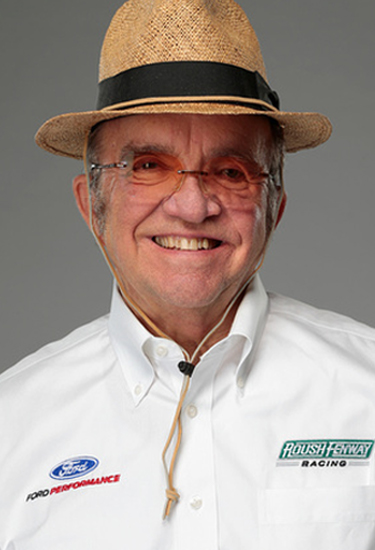 NASCAR Hall of Famer, Jack Roush has built his team into one of the most successful in the history of professional sports.  Roush’s teams have captured multiple championships, in all three of NASCAR’s major series, while taking home over 400 checkered flags in the process.

Roush joined forces with Robert Yates to form Roush Yates Engines in 2003. The engine shop based out of Mooresville North Carolina is the exclusive NASCAR engine builder for Ford Performance.

In 2007, Roush Racing and Fenway Sports Group (FSG) announced the formation of Roush Fenway Racing, an unprecedented relationship that brought together two championship organizations with a distinguished track record of success in their respective businesses and sports.

Roush also heads up ROUSH Industries, Inc., which employs more than 5,000 people and operates facilities in five states, as well as in Mexico and Great Britain. Although primarily known for providing engineering, management and prototype services to the transportation industry, Roush has developed a significant role in providing engineering and manufacturing for the electronics, sports equipment, aviation and motorsports industries.

For more than 50 years, Roush has been committed to finding solutions to what people say cannot be done, being a leader of innovation, and pursuing his passion to create.